The BSM J-Fuzz stompbox is a faithful recreation of the old original Jennings Fuzz from the late 60's. Tom Jennings was founder and master-mind of the VOX company in the late 50's, accompanied by his friend and technician Dick Denney, who engineered the famous VOX AC30 amp as well as the VOX Defiant transistor amp with a built-in fuzz circuit. Both amps became well-known and famous because of the Beatles, who used those amps.

After some troubled times, Jennings sold the VOX label to the Royston Group in 1967 and left the company together with Dick Denney. In 1969 Tom established his new label "Jennings" (Jennings Electronic Development), again with Dick Denney by his side, building stompboxes, fuzzes, WahWahs and more. For some time, Jennings also built his products under some OEM labels, eg. "Roto Sound". The production stopped in 1973. Especially the fuzz from 1969 was different from the similar products other companies built. Like most fuzz boxes at this time the Jennings fuzz, used two silicone transistors, but had a much milder and rounder tone than all the others. With the volume control fully opened, the sound was warm, full and incredibly fat. A tone that reminds of old germanium fuzzes, very different from the typical penetrating silicone fuzz tone we all know. This fuzz circuit was engineered by Dick Denney, and is one of his master pieces. In the early version of this fuzz box, he used transistors from the Japanese "Micro Electronics" company and BSM is proud to say, that we were able to acquire a bunch of these NOS transistors, using them exclusively for the BSM J-Fuzz. After some time went by, Dick Denney substituted the Japanese transistors with a European type, overhauled the circuit and as a result the sound changed.

The magical tone of the J-Fuzz is achieved best by the interaction between guitar player, guitar pickup and Fuzz unit. Therefore the J-Fuzz should be connected in the signal path directly after the guitar. The J-Fuzz is powered by a 9V battery or external 9V power supply with a current consumption of approximately 2mA. The average output level is 5dBm, the maximum output voltage is 0.4V, when the strings are struck really hard. Note: The negative pole of the battery is ground.

VOX and Jennings Musical Industries are registered trademarks of Korg with which BSM is not affiliated! 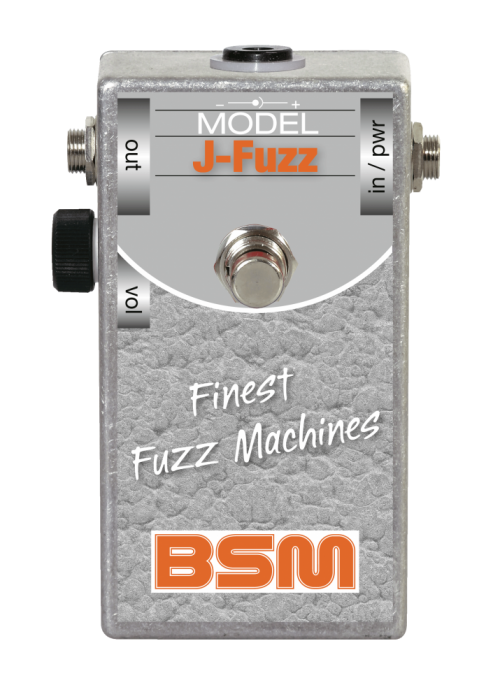 Download this booster's
information sheet
If you have any questions concerning our products, especially the BSM J-Fuzz Fuzz Machine, our tech-head and mastermind Mr. Bernd C. Meiser would be happy to talk to you. So don't hestitate any longer and send him an email to info@treblebooster.net or use the contact form to contact him.