The BSM RM-Metal model is based on the British Range Master unit produced between 1965 and 1969, as used by Eric Clapton in John Mayall's Bluesbreakers. Eric also used the booster when playing in the legendary group Cream. Its biting, powerful sound is clearly in evidence on the Bluesbreakers "Beano" album. Blues rocker Rory Gallagher, Heavy Rock pioneer Tony Iommi and Brian May from Queen were also heavy users of the orginal Range Master unit. The long yearned for new edition, now issued under the name RM from BSM, includes the same OC44 germanium transistors as the the original 1965 version. The RM Metal is a modified '69er RM model like Mr. Iommi's unit, which he has used on his second Black Sabbath records and later. The RM Metal model is recommed for Nu-Rock, low dropped tunings and baritone guitars.

Almost all British rock guitarists using single coil pickup guitars used a germanium Treble Booster from the late 60's to the mid 70's. By the end of the seventies, the Treble Booster was replaced by a new circuit from Japan, the so called Tube Screamer and other similar overdrive circuits. These were based on the old Treble Boosters and therefore had a very similar frequency response. The germanium boosters on the other hand, sadly fell into oblivion despite their unique and inimitable sound. The RM Treble Booster has been designed for single coil and humbucking pickups with standard coil inductance, such as pickups in Fender, Gretsch, Burns or Gibson guitars. On these pickups, the RM Metal produces (with the volume control of the guitar turned up to the max) a fat, biting and penetrating lead sound, minus any shrill characteristics. By lowering the guitar's volume control, many shades of crunch can be easily dialed in. Another thing to consider is that when a guitar amp's volume is turned up (reaching saturation), the power amp normally begins to mute the highs, which results in a duller sound. At an amp's full tilt, the RM Metal Treble Booster allows a more transparent tone (covering the entire frequency range) to shine through. The presence control on the amp need only be minimally used (if at all). When vintage amps are used (such as the Fender Deluxe, Fender Bassman, Vox AC30, plexi Marshall 50 or 100 watt) it is amazing what effect the use of a good treble booster has. It is also of interest to note that Tony Iommi used a Laney stack with Black Sabbath.

The Treble Booster is inserted between guitar and amplifier, not into the FX loop. The magical tone is achieved by the interaction between guitar pickup, treble booster and amplifier. The unit is powered by a 9V battery with a current consumption of approx. 250 uA. The average output level is 10dBm, the maximum output voltage when the strings are struck really hard is 7V max. Note: The positive pole of the battery is ground. 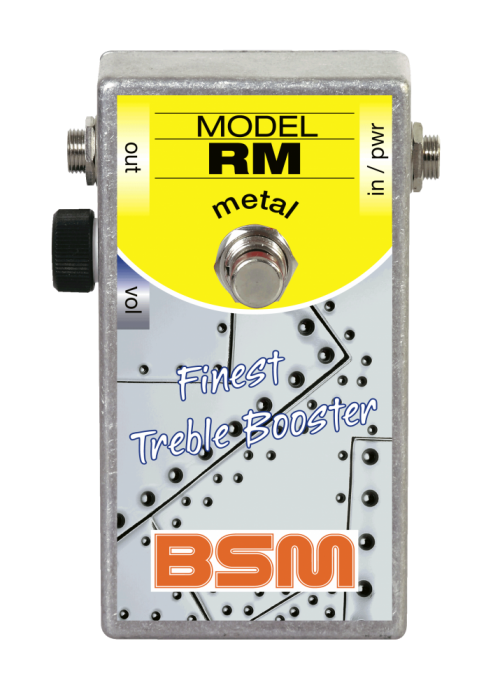 Here are some videos from Benjamin, playing his RM Metal

Check out product reviews
at Harmony Central Download this booster's
information sheet
If you have any questions concerning our products, especially the BSM RM-Metal Treble Booster, our tech-head and mastermind Mr. Bernd C. Meiser would be happy to talk to you. So don't hestitate any longer and send him an email to info@treblebooster.net or use the contact form to contact him.

Many thanks for building the RM Metal pedal. The tone is fantastic!!!!! Very organic very Iommi. I've tried other treble boost before including a naga viper but sold them on very disappointed. I'm using it with a peavey 6505 on the clean crunch channel using a. Les Paul with PAFs Best tone I've ever had Once again thanks
Regards Roger

Hello Bernd, I received the RM Metal. Thanks for getting it to me quickly! You must have the best ear for tone, as the pedal sounds amazing...even better than I had hoped for! With me getting the RM Metal, I am sure you know I was after the Sabbath sound. It nails it! What other of your products do you recommend I try? I mainly play 'heavy' music. Best regards, Chris
Christopher Richardson

Recently heard the RM-Metal booster through a guitar (Gibson) with humbuckers. The tone and sound was amazing!!! I am familiar with the original Rangemaster....the BSM was quieter and smoother!!!!!
Steve Wrobel

Hello Bernd, the RM-Metal arrived this week, and it is ever better than I thought! I want to thank you and all of your staff for the outstanding quality of your work. You can consider me a very happy customer and be sure I will soon enjoy another BSM pedal (by the way, if you are planning to build a wah pedal, please let me know...). Thank you again!
Loris Marino